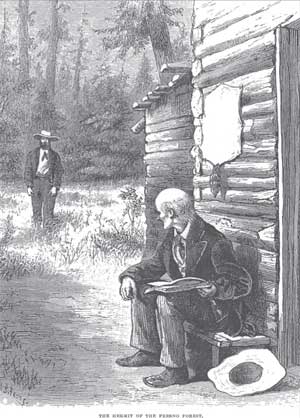 In 1849 John Nelder left New Orleans to find gold. He traveled west to California along with thousands of other gold seekers.

After growing weary of prospecting, he came to the grove in 1875 and built a cabin in the shadows of the towering trees. It seemed that after a life of searching, the true treasure he sought was not gold but the wonder of nature.

John Muir, famed naturalist and author, met John Nelder outside his cabin under the sequoias in 1875. In Muir’s book Our National Parks (1901) he describes walking with Nelder. “His eyes brightened as he gazed on the trees that stand guard around his little home; squirrels and mountain quail came to his call to be fed, and he tenderly stroked the little snow bent sapling Sequoias, hoping they yet might grow straight to the sky and rule the grove.”

In 1889 his cabin burned down and he passed away shortly thereafter.

Biledo Meadow is at an elevation of 7100 feet, on the southwest side of Mount Raymond in northeastern Madera County. Due to the snow load, and the desire to protect the cabins, these two were selected and moved to Nelder Grove in 1980-1981. Around 1982, during a wind storm, a tree fell and demolished one cabin roof. It was rebuilt the following year.

The buildings, structures, and objects found at Biledo Meadow today are related to mining and pioneering activities that took place during the latter half of the 19th century and the first half of the 20th century. 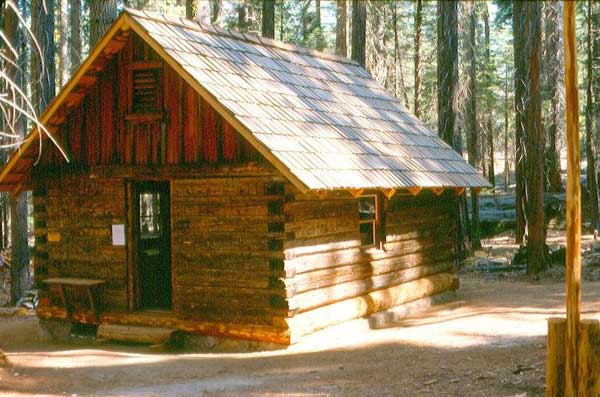 In 1929, Mr. Oscar A. Kelley, applied for a Special Use Permit to build Camp Beulah. The camp was created for disadvantaged children, most of whom came from the San Joaquin Valley area, some came as far away as the Bay Area. The camp opened in 1931. The average stay was two to three weeks. The children had access to a croquet court, took short walks to see the “Big Trees” and even hiked to Fresno Dome (about 5 miles away).

In the campground area, there are two apple trees still producing tasty apples. These were planted by Mr. Kelley’s parents. Camp Beulah existed for only three short years. In the fall of 1933 a new law was passed stating that a registered nurse must be present at all times in any camp for children. The Kelleys felt they were financially unable to comply with the new law. In 1937 the family moved to Oakhurst and in 1938 the buildings in Nelder Grove were torn down.

Found South of the Bull Buck Trail Head. In the meadow there are two walk-in campsites, as well as some nice specimen sequoia trees, a waterfall, and lots of insects and other wildlife.